This is the Home Page of

Playing the best Aussie Pub Rock of the 70's and 80's the
way it was meant to be played. Hard, loud & Unrelenting.

We will be back playing at the Carriers Arms Hotel,
Castlemaine on Saturday 19th October, 2002!
See below for some audio cuts! 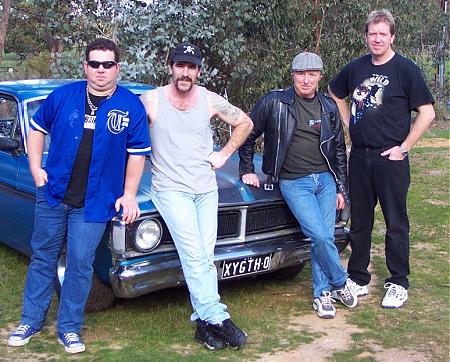 The band is heavily influenced by early (Bon Scott) AC/DC and play mostly Aussie Rock music from the 70’s and 80’s such as AC/DC, Rose Tattoo and The Angels, along with some material from Kiss and Ozzy Osbourne. They play hard and loud, with an energy level that has to be heard to be believed and the "wall of sound" from the Marshall Stacks is awesome!

See some photos from our debut gig at the Carriers Arms Hotel
in Castlemaine on Saturday 3rd August.

We are available for parties, clubs or pubs.
For further details please